The days leadin up to me finally cracking this game open came with deep thought and caution, not knowing if I should take the game back or if I should make my own opinion about it. Needless to say, I opened it… here is my awesome review 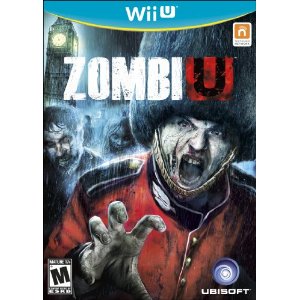 Here the sitch (situation): You awake in a zombie infested London. You gotta run and do missions for some anonymous dude that is talking to you over the radio. It is a pretty fair story. Nothing we haven’t seen in a zombie story before though. But by now, what else can they do really?

So, here is what is attractive about this game… the gameplay. Some would say you just bash in the heads of zombies with a cricket bat constantly, but there is much more. The Gamepad is where it’s at. It is your inventory. With the tap of the screen, you can heal, pull out weapons, set up and tear down barricades, etc… you can also use the gyroscope to scan rooms for hidden objects and to aim when sniping or on a turret gun… of course you can just use the control sticks as well but the gyro is just fun… Another great thing is there is low supply on ammo, keeps the tension and horror up. The multiplayer is pretty amazing. In this mode, one person is controlling a character on the screen, trying to capture flags and kill zombies. All while the person with the tablet is sending out zombies to kill the other player. This guy is the Zombie King. Zombie King can also capture flags and upgrade his zombies to something a bit more challenging for the player to go up against. I was faced with an exploding zombie who you gotta shoot in the head for him not to explode on you. Or you can shoot him in the body for a well timed explosion, to use it against other zombies…

Well, the visuals are kinda weak. Early 360 at best for character models. It does do a good job of keeping the scenery spooky. Most of the time I am going through dark scenes with just a flashlight guiding me. It’s creepy as heck and enough to keep you scared. The dark corridors can be a bit too dark at times. And of course the dismemberment is nowhere near the awesomeness of  Left 4 Dead.

The zombie grunts are pretty cool. The grunts your character makes when you swing the cricket bat is pretty cool. There is hardly any music that plays so it makes the horror a little more horrifying. The sound of the rain is great. Gunshot sounds are nice but you can tell that the 50 cal. turret could use a little more. Basically, this game does enough to keep you scared and it does enough to scare you.

although it has it faults, this game is pretty spooky and it seems to take pointer from classic horror games. The multyplayer is very fun and should keep you coming back.