A Letter to Reggie 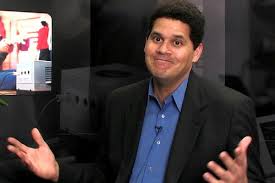 The picture about pretty much sums up what, I think, you think of us loyal Nintendo fans.

You see Reg, may I call you Reg? You see Reg, I do not hold you in such a high regard as others within the gaming community. You seem to have some charismatic qualities about you, but I do not think that you really have your finger on the pulse of what we, as gamers, are looking for.

For example, remember Operation Rainfall? It was that grassroots movement created to convince you to bring over Xenoblade Chronicles (Monado)  and The Last Story to America. After launching Xenoblade to the top of Amazon’s preorder list you gave us the following response:

Another thing Reg, why is it that the UK, Germany, Japan, and even CHINA are getting cool 3DS and Wii U swag and we get nothing? Are the sales numbers of special 3DS sales not impressive enough to warrant additional special 3DS XLs to be made? Since Japan is getting a Monster Hunter Wii U bundle, and the UK is getting the Zombi U Wii U bundle, is it safe for me to assume that we will be getting some launch bundle also??? Nope, didnt think so. Reg, you already sold out of your initial run of Wii U’s give us a bundle to buy as well. There is obviously demand for one. I am just going to assume that we will be getting some sweet new Bayonetta 2 bundle when its available. Am I right Reg?!

Also, recently it was reported that Miyamoto has been visiting 3rd party developers to get support for the Wii U. Why aren’t you doing this? You live in America? Why are you not going around to developers and showing them what the Wii U can do? How are you showcasing the Wii U?

Anyway Reg, I do believe that you are not putting your customers wants and needs where they should be: the forefront. All the other divisions of  Nintendo get cool bundles, new 3ds models, and contests, while, we American gamers get, to use the scientific term, diddley squat.

PS. However, I am hoping that you will release Bayonetta 2 Wii U bundle here soon. Can I count on you for that Reg?